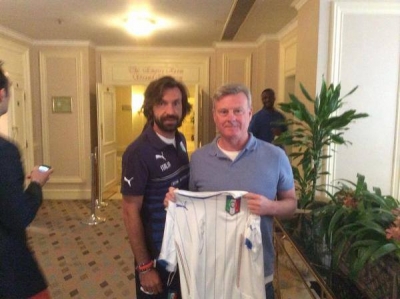 This Saturday, Wednesdayite weclome twenty guests associated with the Patrick O'Connell fund coming to the match against Middlesborough.

They will be bringing along signed shirts which have been donated by various clubs/players to the fund.

And you could both help the fund and bag a unique signed football shirt.

First up was a squad signed Barcelona Shirt (see article below)

Now we have a  Italy shirt signed by Andrea Pirlo who plays for Juventus and has represented Italy 113 times scoring 15 goals.

Picture below is Pirlo handing over the signed shirt to a POC Fund representative.