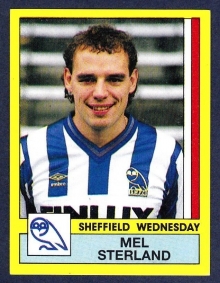 Blog - There's only ONE Zico!

Who is the best right back to have played for Sheffield Wednesday? Peter Shaw looks back on the career of Mel "Zico" Sterland , utilising his fantastic memory for facts and matches alike.

Some fans of SWFC may regard Roland Nilsson as arguably our best ever right back. There's no doubt that Roland was "class on grass" but I believe he has a real contender as best right back from within the ranks of our own Wednesday supporters! Mel "Zico" Sterland was an outstanding footballer; maybe not as elegant as Roland but boy, did he have qualities! His manager at the time, Big Jack Charlton, affectionately referred to Mel as the "flying pig" in recognition of his rampaging runs down the wing from right back but the supporters on the Kop preferred the name "Zico", after the Brazilian legend. And no one can argue that Zico Sterland, being a home grown product and a lifelong Wednesdayite isn't a Wednesday legend. His popularity amongst supporters was unrivalled during the 1980s. Words are inadequate tools to describe the essence that is Mel Sterland but I think committed, passionate, desire to win, are all terms to describe our Zico. After Wednesday coach, John Harris, converted Zico from a forward/midfielder to a full back, I cannot think of a more appropriate word to describe Zico than "swashbuckling". His style was captivating, his energy, dynamism and attitude were inspiring, his goals were often memorable, and his success was undoubtedly an inspiration to other home grown youngsters.

Having said all of that, what are the qualities that make Zico a legendary figure in the eyes of so many Wednesdayites?

He made his debut as a 17 year old in 1979 against Blackpool in the penultimate game of the season and scored against Hull City on the final day of the season 2 days later in a 3-2 defeat, this all before he was even a full-time professional.

He was part of the England U-21s that conquered Europe to win the European Championship in 1984. Zico himself scored in the Final against Spain to secure victory.

Subsequently, good performances at Club level resulted in him becoming the first Wednesday player to be capped at senior level for England since our legendary goalkeeper, Ron Springett.

He scored 49 goals for Wednesday and created many more with his crosses from wide positions.

Zico scored the penalty kick in front of the Kop that returned us to the top league after a 14 year absence; we beat Crystal Palace 1-0 on a warm afternoon on April 28th, 1984 with Mel's goal being decisive.

After leaving The Owls for Glasgow Rangers in 1989 for a club record fee, his departure helped fund the purchase of Carlton Palmer, Steve Whitton and a successful survival campaign. But his ability continued to pay dividends; he scored 3 goals in 9 games for Rangers, helping them win the Scottish Championship before rejoining Howard Wilkinson later in 1989 and helping Leeds win the second tier and top tier leagues in England in consecutive seasons, a remarkable achievement.
So Zico Sterland had a successful career and won league titles North and South of the border. But does such success make him a Wednesday legend? Not in my eyes. Does the fact he is a lifelong Wednesday fan, a local lad from the Manor Estate who joined the Club straight from Waltheof School in June 1978 make him a Club legend? Well it certainly helps but there are other factors which help elevate Zico to legendary status.

Mel Zico Sterland gave his all on the pitch. He was courageous, didn't hide when the going got tough, he was a real man when he stepped over the white line. He was fair in how he played the game, loyal to his team-mates and interacted well with all the fans, young and old. And in the current age of the mercenary footballer where loyalty seems a distant memory from a by-gone era, Zico epitomised what the ordinary fan loved about the game; Zico cared. He cared for the fans, he cared for the Club, he cared about his performances and how his team-mates performed.

One of my most vivid memories in following Wednesday for over 55 years is watching a clearly distraught Mel Sterland leaving the pitch at Villa Park in April, 1986 after we had been beaten 2-1 by Everton after extra-time in the semi-final of the Cup. We, the fans, identified with his pain and trauma, he felt what we felt. That creates an authentic unbreakable bond that can never be simulated. Fans don't like to watch a player sitting on the subs bench in an F.A. Cup Final, singing along to music on his headphones, with apparent minimal interest in the game. They don't like to watch their own player fail to score on a cold night at Wolverhampton in a penalty shootout, and walk back smiling and grinning. They want the players to feel what they feel, to care how they themselves care.

Mel Zico Sterland cared, besides being a top player. He related to the fans as a player which was reciprocated at all times. We felt he was one of us and whenever our paths have crossed he has come across as a wonderful, warm and approachable human being. That is a fantastic legacy, perhaps more important than any medals or what he achieved on the pitch. But his career should also serve as a cautionary tale to any young player returning from injury. Don't rush back, let Mother Nature run its course and avoid pain killing injections and cortisone injections like the plague. But that was Mel, always committed to the cause, always wanted to play and always wanted what was best for the team. Yes the man was a true Wednesday legend; there is indeed ONLY ONE ZICO!!

Thanks for the memories Mel.

The views expressed in Wednesdayite.com blog articles are those of the author and not necessarily the views of Wednesdayite,  Wednesdayite Limited, or anyone associated with the company.
Read 7576 times

Tweet
More in this category: « Blog - Out with the old, in with the blue... Blog - Deadline Day »
back to top